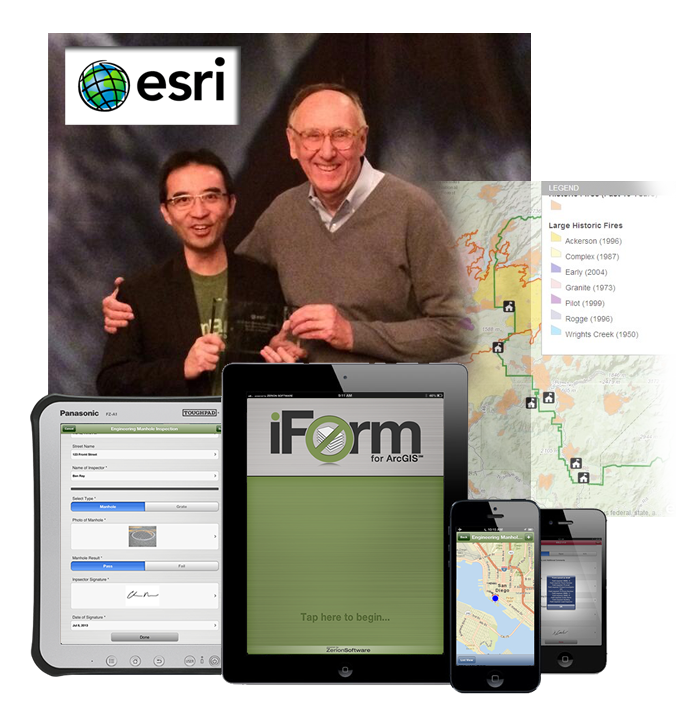 During 2013, Zerion Software developed a deep integration between iFormBuilder and the Esri platform. GIS Professionals now have the ability to build robust forms with skip logic, calculations and related tables, capture data on their mobile devices with or without an internet connection and seamlessly integrate data collected in the field with their existing Esri ArcGIS Online or Esri for Server.

“When Esri is the ‘Where’ and iFormBuilder is the ‘What’… great things happen! It is an honor and privilege to be recognized by Esri for this award,” said Sze Wong, CEO at Zerion Software, Inc.  The past year presented amazing opportunities for both Esri and iFormBuilder to do what they do best and use good data to make a difference in communities around the world.  Together iFormBuilder and Esri:

“Being named 2014 Best New Partner motivates our team to be champions of discovering what’s next for mobile data collection in the GIS community,” said Chris Reichart, CBO of Zerion Software, Inc.. “iFormBuilder and Esri are better together. iFormBuilder’s ability to capture complex data and critical GIS information on an iOS or Android device, even while offline, and easily visualize datain Esri’s ArcGIS is a game changer for many organizations.”

About Zerion Software, Inc.
Zerion Software, the creator of iFormBuilder, was founded in 2004. iFormBuilder is a universal, cloud based mobile data collection platform helping customers around the globe collect data on their mobile devices. iFormBuilder believes “Knowledge is Gathered.” The iFormBuilder Mobile Platform offers companies, universities, non-governmental organizations and government agencies the ability to build robust and flexible forms, maintain unmatched security on mobile devices and collect data with or without an Internet connection.

About Esri
Since 1969, Esri has been giving customers around the world the power to think and plan geographically. The market leader in geographic information system (GIS) technology, Esri software is used in more than 300,000 organizations worldwide including each of the 200 largest cities in the United States, most national governments, more than two-thirds of Fortune 500 companies, and more than 7,000 colleges and universities. Esri applications running on more than one million desktops and thousands of web and enterprise servers, provide the backbone for the world’s mapping and spatial analysis. Esri is the only vendor that provides complete technical solutions for desktop, mobile, server, and Internet platforms. Visit Esri at esri.com/news.